The OSI reference model was created in the late 1970s, and the main reason the International Organization for Standardization (ISO) released the OSI model was so different vendor networks could work (communicate) with each other.

One of the greatest functions of the OSI specifications is to assist in data transfer between disparate hosts, meaning, they enable us to transfer data between a Unix host and a PC or a Mac, for example.

The OSI isn’t a physical model, though. Rather, it’s a set of guidelines that application developers can use to create and implement applications that run on a network.

It also provides a framework for creating and implementing networking standards, devices, and internetworking schemes. 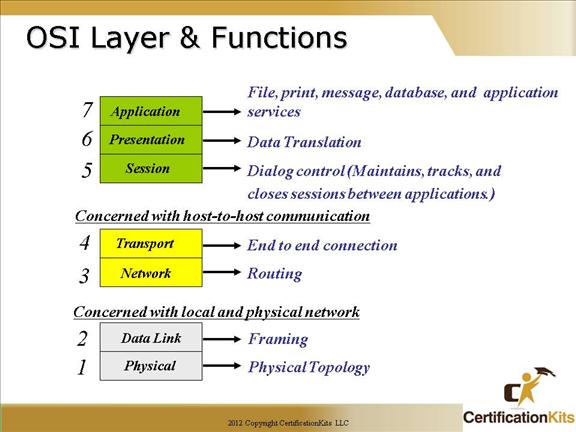 Application layer – The spot where users actually communicate to the computer.

Presentation layer – Presents data to the Application layer and is responsible for data translation and code formatting.

Session layer – Responsible for setting up, managing, and then tearing down sessions between Presentation layer entities.

Transport layer – Segments and reassembles data into a data stream.

Network layer – Manages devices addressing, tracks the location of devices on the network, and determines the best way to move data. 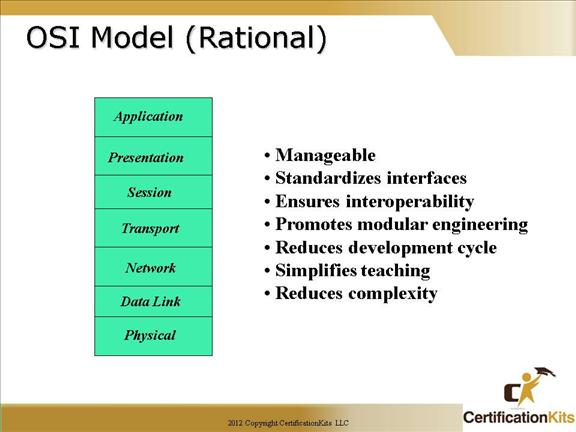 Early network development was chaotic. The early 1980s saw tremendous increases in the number and sizes of networks. By the mid-1980s, companies began to experience difficulties from all of the expansions they had made. It became more difficult for networks using different specifications and implementations to communicate with one another.

To address the problem of networks being incompatible and unable to communicate with one another, the International Organization for Standardization (ISO) researched different network schemes. As a result of this research, the ISO created a model that would help vendors create networks that would be compatible with, and operate with, other networks, hence the OSI reference model.

The OSI reference model was released in 1984. It provided vendors with a set of standards that ensured greater compatibility and interoperability between the various types of network technologies produced by companies around the world.  The OSI model is considered the best tool available for teaching people about data networks. 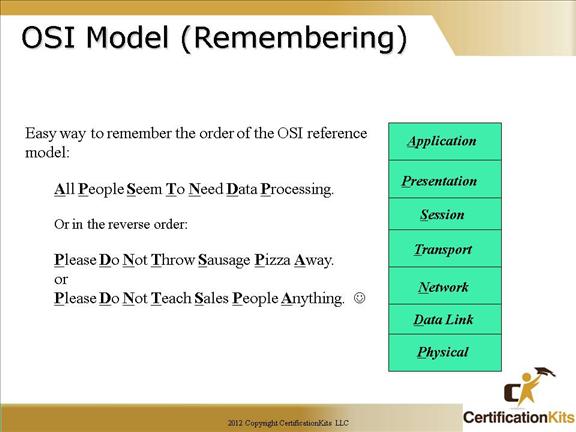 Sentences to help remember the layers of the OSI Reference Model:

Please Do Not Throw Sausage Pizza Away.

Please Do Not Teach Sales People Anything. 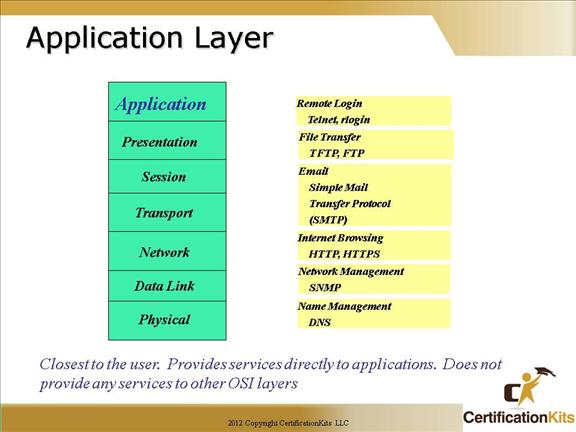 The Application layer (also called Layer 7) of the OSI model marks the spot where users actually communicate to the computer.

A vast array of protocols combine at the DoD model’s Process/Application layer to integrate the various activities and duties spanning the focus of the OSI’s corresponding top three layers (Application, Presentation, and Session). 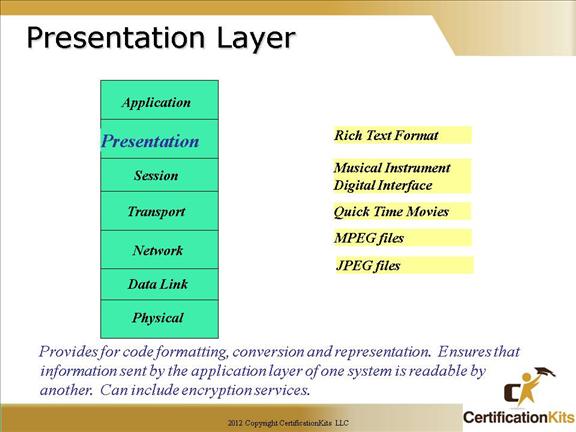 The Presentation layer (also called Layer 6) gets its name from its purpose: It presents data to the Application layer and is responsible for data translation and code formatting.

This layer is essentially a translator and provides coding and conversion functions. A successful data-transfer technique is to adapt the data into a standard format before transmission. 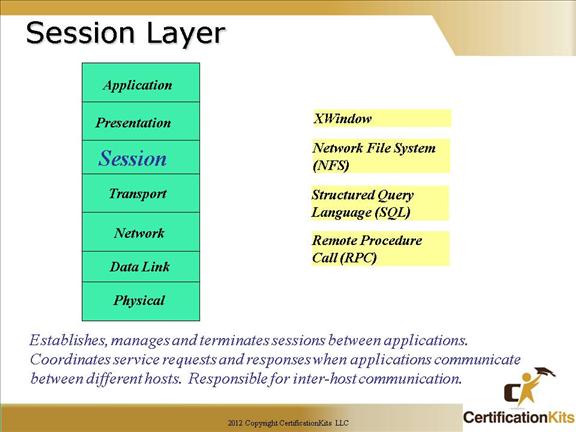 The Session layer (also called Layer 5) is responsible for setting up, managing, and then tearing down sessions between Presentation layer entities.

This layer also provides dialogue control between devices, or nodes. 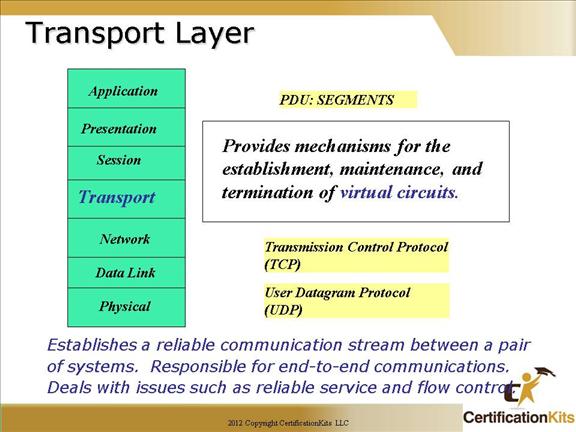 Services located in the Transport layer both segment and reassemble data from upper-layer applications and unite it onto the same data stream.

They provide end-to-end data transport services and can establish a logical connection between the sending host and destination host on an internetwork.

Provides mechanisms for the establishment, maintenance, and termination of virtual circuits.

The Transport layer can use positive acknowledgement and retransmission to ensure reliable delivery. 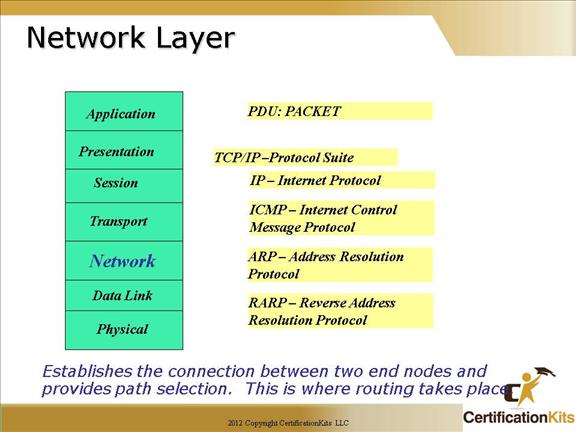 The Network layer (also called Layer 3) manages devices addressing, tracks the location of devices on the network, and determines the best way to move data, which means that the Network layer must transport traffic between devices that aren’t locally attached.

Routers (layer-3 devices) are specified at the Network layer and provide the routing services within an internetwork.

Tracks locations of devices on the network

PDU at the Network layer is called “Packet”. 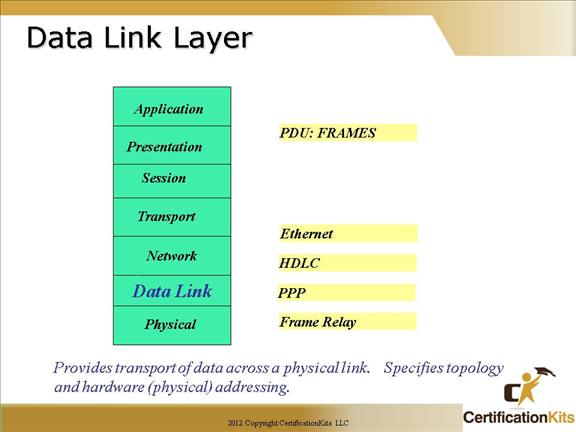 This means the Data Link layer will ensure that messages are delivered to the proper device on a LAN using hardware addresses, and translates messages from the Network layer into bits for the Physical layer to transmit. 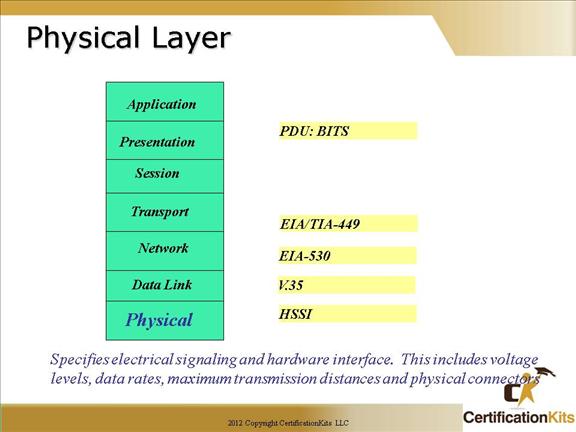 Finally arriving at the bottom, we find that the Physical layer (also called Layer 1) does two things: It sends bits and receives bits. Bits come only in values of 1 or 0—a Morse code with numerical values.

The physical layer defines the electrical, mechanical, procedural and functional specifications for:

the physical link between end systems. 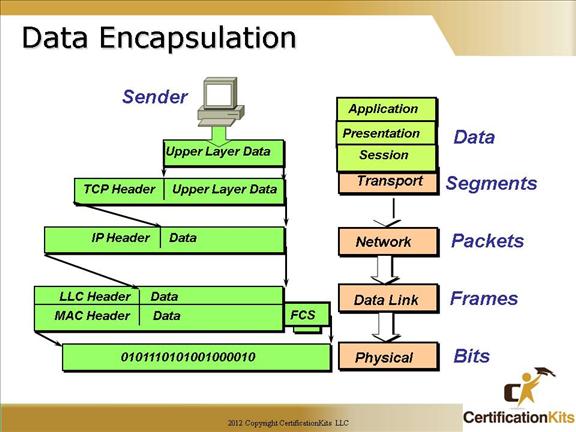 Data Encapsulation is utilized when data is transmitted from the application layer to the physical layer of the OSI reference model.

Following the data stream on the figure above:

Data is converted to segments, which allow hosts to reliably communicate (At the Transport Layer)

Frames are converted to bits, and uses a synchronization and clocking function (At the Physical Layer)

Again, data encapsulation occurs when going from layer 7 to layer 1 of the OSI reference model. 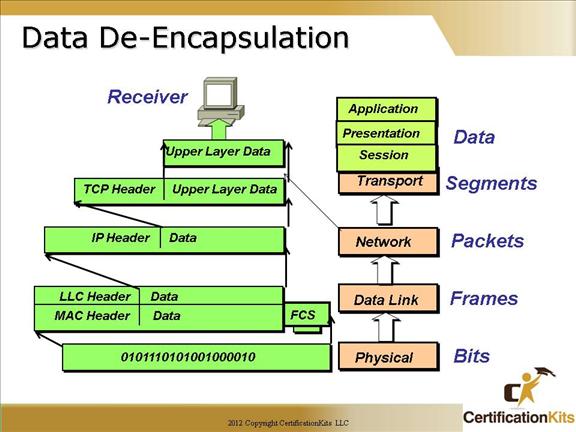 Data De-Encapsulation is utilized when data is transmitted from the physical layer to the application layer of the OSI reference model.

For Data De-Encapsulation the reverse data stream (as compared to data encapsulation) happens:

Packets are converted to segments and sent to the Transport Layer

Segments are converted to data and sent to the Transport Layer

Again, Data De-Encapsulation occurs when going from layer 1 to layer 7 of the OSI reference model. 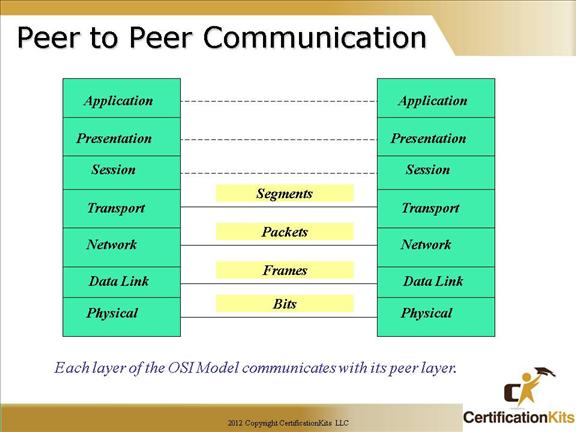 Each layer of the OSI model at the source must communicate with its peer layer at the destination.  During the protocols at each layer exchange packets of information called protocol data units (PDUs) between peer layers. 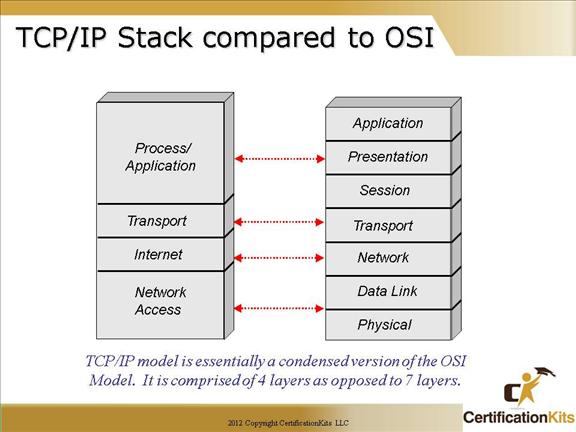 The TCP/IP model is basically a condensed version of the OSI model—it’s composed of four, instead of seven, layers:

The OSI model and the TCP/IP stack were developed, by different organizations, at approximately the same time as a means to organize and communicate the components that guide the transmission of data.

Dropdown Menu inside a Navigation Bar

Hover over the "Dropdown" link to see the dropdown menu.

One Thought to “ccna-OSI MODEL”